But did you know they’re more than a movie-time snack?

My friends and I like to bring popcorn kernels on our camping trips and pop them over the campfire – you don’t need more than a heavy-duty aluminum foil and a stick.

It’s super fun, and it makes us feel like we’re doing things the old-fashioned way.

Anyway, I’ve been thinking about this lately, and I’ve decided to share with you some of the best popcorn kernels on the market.

It’s time for you to discover the many benefits of making your popcorn.

Take a look at some of the best popcorn kernels currently available on the market:

I feel like I owe Kristy (the founder of Quinn Snacks) an apology for saying such bad things about microwave popcorn (you’ll read more about it later) because I think she’s set on entirely changing the game.

Gluten-free, non-GMO microwave popcorn that doesn’t contain any preservatives, artificial flavors or additives, all wrapped up in a bag that doesn’t have any traces of plastic or chemical coatings? Sign me up!

Those of you that are trying to live an eco-friendly lifestyle will appreciate the fact that the bag is made entirely out of recyclable, compostable paper.

Told you this brand was a game-changer. I feel like a lot of microwave popcorn manufacturers are going to have to work extra-hard to catch up.

As you can imagine, I was more than thrilled to give these a try.

The best thing about these kernels is that you're not limited to popping them in the microwave – stovetop popping will work, too.

And don’t you just love when your popcorn kernels come pre-packed? Everything you need in one package – organic kernels, sunflower oil, and spice packages (butter powder and sea salt).

The process is straightforward – pop them, pour in the included seasoning, shake the bag – it’s as simple as that.

However, they do cost a bit more than your standard batch of popcorn kernels and you might end up with a lot of unpopped kernels at the bottom of the bag, so consider that before making a purchase.

The first thing that caught my eye was the fact that the manufacturer cared enough to make their product suitable for customers with different cultural and religious backgrounds, as well as health concerns.

These kernels aren’t just non-GMO (which, in this day and age, is somewhat significant), but gluten-free, and labeled as Halal and Kosher-certified.

That’s some good ethics right there.

One thing that bothered me was the packaging. While it’s nice to have four pre-measured packages in a box, but once you open one of these, they tear so easily.

So, if you want to avoid cleaning your kitchen due to the kernels spilling everywhere - trust me, even if you clean it all up, you’ll still find one or two left from time to time - it would be best if you could get a jar to store the kernels in.

Also, keep in mind that these don’t contain any preservatives, which makes them susceptible to going stale rather quickly – once you pop them, make sure you eat them.

As you might have noticed by now, I’m a big fan of all things organic and non-GMO, so naturally, I decided to give these kernels a try – a few, actually, but more on that later – and I wasn’t disappointed.

They pop up nicely, and the amount of unpopped kernels is so small that it’s not worth mentioning.

The taste is lovely – I love that raw, unprocessed popcorn flavor they have. I know, I know, what else are popcorn supposed to taste like, other than popcorn, right?

But if you take a look around, you’ll soon realize everyone is trying to make them taste like something else – butter or cheese.

It’s nice to be able to have something as simple and natural as these popcorn kernels from time to time.

You know why I’m so sure these kernels are genuinely pesticide-free and organic?

Because of all the bugs in the bag, along with the kernels. A quick research showed I wasn’t the only one, which only further horrified me.

I don’t want to sound too harsh, though, but at the same time, I want to be as honest as possible with you guys.

To be fair, I still like the Great Northern’s popcorn very, very much and I think it’s a shame I received such a bad batch of their kernels on one of the occasions.

However, they’re not losing me as a customer, that’s for sure.

4. Great Northern Popcorn – Be Careful With All That Salt

Everyone loves popcorn, that’s for sure; measuring out the right amount of oil and kernels, and washing up the measuring cups afterward? Not so much.

That’s why I’m so excited to present to you the solution to the less-fun part of making popcorn – the Great Northern’s popcorn kernels.

What so great about them?

The fact that they come pre-measured – and I’m not only talking about kernels here. Everything you’ll need to make perfect popcorn every single time comes included in the package - you’ll find that each portion contains two additional pouches, one for oil, and one for salt.

The entire preparation process couldn’t be more simple; it comes down to three simple steps – open, pour, and pop.

But if you’re not particularly fond of salty popcorn, you might reconsider pouring in the entire pouch of salt provided with your kernels, because that’s A LOT of salt.

It’s always easier to add more if they’re not salty enough for your taste, but there’s no way to remove any if it turns out to be too much.

Don’t say I didn’t warn you.

5. Hoosier Hill Farm Gourmet Mushroom, Popcorn Lovers – For Those Who Like Mushroom-Shaped Popcorn

If you’re anything like me, you’ll be glad to know that these are non-GMO, on top of being full of antioxidants, fiber-rich popcorn kernels, which makes them a healthy snack for you and your family.

Hoosier Hill Farm is a relatively new brand – they’ve been around since 1999, but it seems that they managed to build a name for themselves in the past two decades.

If I were you, I would give them a chance – especially if you’re a fan of mushroom popcorn.

Due to their large, fluffy, ball-like shape, they’re one of the best popcorn out there when it comes to coating them, so if you have a sweet tooth, here’s a tip:

Try these covered in chocolate or caramel – they’re more than yummy!

Now, let’s take a look at the container.

Speaking of storage, I have to say that this a rather convenient container when it comes to keeping this large batch of kernels fresh.

However, they didn't label it as organic, so if that's something you're after, keep looking.

How To Choose The Right Popcorn Kernels: Things To Look For

How Fresh They Are?

Freshness is one of the primary things to consider when buying a batch of popcorn kernels - after all, you don’t want your popcorn to have a stale taste, do you?

The fresher the kernels, the better the flavor. That’s something you should especially look out for when you’re buying them online; think about the shipping process and how it will affect the freshness of the kernels you just ordered.

If I told you to imagine a bowl of freshly popped popcorn, chances are fluffy, light, irregularly-shaped popcorn are what you’d have in mind.

However, there are two types of popcorn, made from two different kinds of kernels – but more on that later.

For now, all you need to know is that, besides those „butterfly“ popcorn, there’s another, less common type – the „mushroom“ popcorn.

These are a lot denser and have a compact, ball shape, which makes them ideal for all kinds of coatings.

The packaging will have a great effect on the freshness of the kernels, so when you’re buying a larger batch, you should opt for those that come in an airtight container or a re-sealable bag.

Smaller quantities, however, don’t require any „special“ containers, as you’re very likely to finish the entire bag in one sitting.

I mean, there’s no point in looking for a container that will help retain freshness when there’s nothing to keep fresh in the first place.

Since there are a lot of different packaging options out there (you probably already noticed this while you were reading the reviews), it will ultimately come down to your preference.

Hull-Less Popcorn Is A Thing

Well, that’s not entirely true. There are, in fact, popcorn kernels that manufacturers advertise as hull-less, but before you get carried away, take a realistic look at those claims - you can’t have kernels without seeds, can you?

No. It is, however, possible to find popcorn kernels with smaller hulls; when you pop these, the hull becomes tender and way less noticeable.

If you struggle with them getting stuck in your teeth or your braces, then you should consider opting for a brand known to deliver the so-called „hull-less" popcorn.

As you can probably tell by now, popcorn kernels come in two colors – yellow and white.

Besides their color, they differ in size, shape, as well as how they look once you pop them.

While yellow kernels are medium to large and pearl-shaped, white ones are significantly smaller and have more of a rice granule shape.

Also, once popped, yellow kernels take on what’s known as a „butterfly“ shape, while white kernels turn into “mushroom“ popcorn.

How You Plan On Popping Them?

There’s more than one way to pop your kernels – you can use the stove, an electric popper, or air poppers (microwave ones included).

However, you should keep in mind that not every type of kernel is suitable for all of the popping methods mentioned above.

So, before you decide to buy a particular brand, check if they’re right for your specific popping method.

1. How Long Do MREs Last? Eat It or Forget About It?

Why You Should Always Go For Popcorn Kernels: Make Your Own Popcorn

There’s more than one good reason to switch from those pre-seasoned microwave popcorn to the plain, ol’ popcorn kernels.

Buying popcorn pre-popped is probably even worse – you have no idea what they put in them, and they always seem to have a stale taste, no matter how much they try to advertise them as „fresh.“

Let’s take a look at some of the main benefits of switching to popcorn kernels:

Get Ready For Some Popping: Final Word

Now that you’ve learned the importance of picking the right popcorn kernels – and the tips on how to do it successfully – and you’ve seen my top five best popcorn kernels currently available on the market, it’s time for me to announce the winner.

I would recommend you the Great Northern Popcorn. 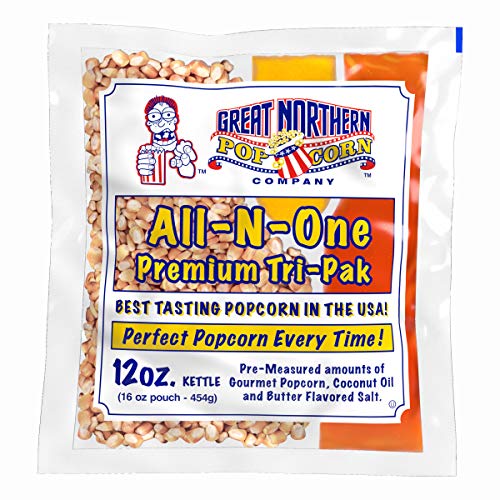 They’re not only healthy (remember, they’re non-GMO and gluten-free) but easy to prepare, too – everything comes pre-measured.

What’s not to love about it?