Camping trips are fun, most of us agree on that.

However, with the waterproof tents that don't allow air circulation and those mandatory sleeping bags, the inside of the tent can get so hot that it could potentially make you sick, let alone irritable.

So, how are you supposed to deal with this when you're out in nature?

I hold the answer - tent fans. Let me help you get the best camping fan on the market, and you'll never have to deal with that overwhelming heat again.

These models that serve both as a fan and a lantern are what I firmly recommend, because of their versatility.

Instead of packing two separate units, you can have one that does two jobs at once – provide lighting and ventilation.

Since my focus in this article is on camping fans, I’ll discuss those features first, and only briefly mention the LED lights.

Let’s start by saying that this is a battery powered unit that uses two D-cell batteries; you’ll need to order them separately.

The average runtime advertised by the manufacturer promises up to 15 hours in low and 5 hours in a high-speed mode; when used only as a lantern, the batteries can hold up to 20 hours.

Even though it’s mainly intended to be used as a hanging fan, this model is designed in a way that allows it to be transformed into a standing fan, too; this is done by using the LED light ring as a base for the fan.

Lastly, I’d like to talk about noise level; while not having an entirely silent operation, it’s not loud either.

It sounds a lot like white noise, which could help you fall asleep when you’re out in nature, especially if you’re used to the loudness of city life.

One of the cheapest models on our list (and possibly on the entire market), this little fan delivers a strong cooling effect; to whoever sits directly in front of it, that is.

Seriously, its 5-inch diameter is so small that it probably wouldn't be capable of providing noticeable air circulation even in an equally small tent. That would be its main drawback.

However, some great things about it deserved it a place on my list.

First of all, it is a battery powered tent fan, which means there's no need to limit yourself to a camping site with a source of electricity. It requires two D-cell batteries, so remember to stock up on those before going on a longer camping trip.

Another great thing about it is that it's lightweight due to its size, which makes it easily portable.

The unit is designed in a way that allows you to fold it for efficient storage when you're not using it or for an easier fit in your camping backpack.

On top of that, if you want to direct the airflow in a particular direction, you can always tilt the fan in the desired direction.

As I said, it's small so I wouldn't recommend it to a group of campers larger than two. It's an excellent choice for an individual camping fan, though.

You can always use it to cool down after a hike or to provide some air circulation around your sleeping bag, but don't hope it'll do the same for others.

What sets it at a distance from the other models I’ve picked out is the fact that it comes with a rechargeable battery and a USB cable.

But trust me, you’re going to need it because this camping fan eats through its battery in a matter of hours. Depending on the speed setting, the battery lasts anywhere from 1.5 to 6 hours, which is noticeably low, especially when equaled to other models and their runtimes. Also, keep in mind the battery has a limit of 500 charge-discharge cycles.

When it comes to speed, it offers three different levels – low, medium and high; trust me, you’ll feel the air circulating – this little guy is surprisingly powerful.

These are directly set by pressing the „On“ button, while the lights will indicate which one you choose.

Another interesting feature can also be discovered by long pressing the „On“ button while the fan is already working; if you do that, an internal blue light will come on.

It can act as a great night-light if you’re simply not used to sleeping in complete darkness.

In case you need a bit stronger light source, by pushing the same button, you can turn on the side LED lamp; it’s small, but it’ll do the job.

When it comes to camping equipment, the name Coleman is a name with a 100-year long history.

When you’re buying a product from one of the frontrunners in the camping gear industry, there are certain quality standards that you usually expect; let’s see how this tent fan lives up to those expectations.

That is a battery-powered camping fan, operated by four D-cell batteries; these are sold separately as 8-packs.

With a runtime of up to 21 hours, this fan would work perfectly for shorter camping trips; in case you plan on spending more than a couple of days in the great outdoors, consider bringing replacement batteries, just in case the ones in the fan start to die out.

Since the fan’s blades are made of foam and flexible, they won’t provide the same level of airflow as metal blades would, despite the adjustable speed.

However, they are less dangerous, even without the safety cage, so they’re much more children and pet-friendly.

No one will get hurt if curiosity gets the best of them and they decide to stick their finger in there; hopefully, it won’t come to that, though.

How to Choose the Best Fan for Tent Camping: Things to Consider

The first thing you should decide on when buying a camping fan is the type of power source you plan on using.

Typically, fans that campers use in tents are battery powered because not all campsites have access to electricity.

However, as you’ll soon find out, there are two more types – solar-powered and electric ones.

Electric Fan - If you don’t want to bother bringing additional batteries for your fan, then an electric fan might be the perfect option for you.

However, you need to know that, when choosing this type of fan, you’re limiting yourself to those camping sites that have a power supply. Also, in case you need to use an extension cord (which you probably will), make sure to get one that is suitable for outdoor conditions.

Battery powered Fan - These fans are the most common choice of campers because they don’t require access to electricity - they are the definition of portable.

But, as you know, batteries die out, so you’ll need to prepare and bring replacement batteries for extended camping trips.

Keep in mind that if you run the fan on a low-speed setting, the battery will last longer; you can get several hours from a single set of batteries.

Solar Powered Fan - These are the most eco-friendly fans on the market – they’ll use sunlight as a way to recharge; keep in mind that you may face some difficulties with powering your fan on a cloudy or rainy day.

Some of these have a general battery in addition to the sola﻿﻿r one; if the fan you plan on buying has this option, I strongly recommend it.

Discover More: How to Keep a Tent Cool in the Summer

Regarding set-up, there are two types of fans to choose from:

Hanging Tent Fans - These fans are similar to ceiling fans – you set them up by hanging them on the top of your tent.

Because of their position, they’re capable of cooling a much larger area than standing fans, which makes them suitable for big tents that accommodate several people.

Another advantage is that many of them come with additional LED lights.

The main issue with this type of camping fans is that they’re prone to falling, especially in windy conditions.

You can adequately secure some lighter models onto the tent rod, but just to be safe, monitor the weather and take them down in case of heavy wind.

Standing Tent Fans - This type of camping fans is the more common one, as they are way easier to set up that their hanging counterparts – you just need to find a flat surface and that’s it; however, they do tend to be a lot bigger than the previously mentioned hanging fans.

They come with a wide, stable base, and in some models, adjustable height.

What’s great about these is that they can be used not only when you’re camping, but when you get home, too.

What’s not so great is that they may take longer to circulate cool air around the entire tent; they’ll still cool a small area relatively quickly, though.

They’re the best solution when you need a fast relief from summer heat.

​Camping fans come in different sizes to suit various tent sizes, so you have to keep the dimensions of your tent in mind when choosing a fan.

Smaller fans seem to be a bit more dangerous than their larger counterparts because they usually don’t come with a cage for its blades; medium-sized ones are widely popular because they can cool down standard-sized tents and have a protective cage.

If you own a tent that fits several people, then you’ll need a bigger fan, one that’s capable of delivering a high airflow for the entire tent.

When it comes to fan’s blades, you can choose between the foam and metal ones.

Obviously, foam blades are more suitable for fans without a safety cage, and they make the whole camping fan weigh a lot less.

Metal blades, however, are made for high-power fans, but they tend to make the fan a lot heavier, which is never a great feature for a portable unit.

PRO TIP: Sometimes even a camping fan won’t be able to help you cool down; always have some extra ice packed in your cooler for situations like this. Place the ice on a plate in front of the fan – that way you’ll lower the temperature of the circulating air.

Our Choice for the Best Camping Fan 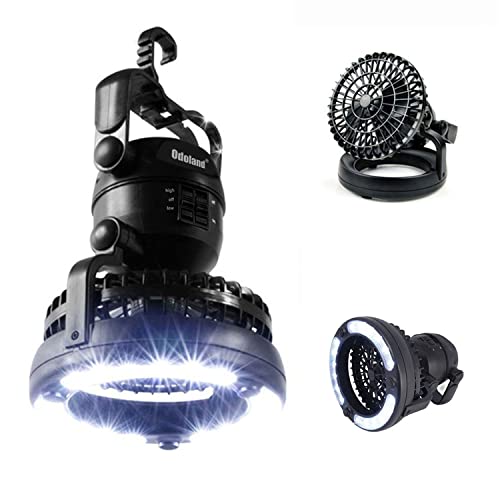 As I near the end of this article, it's time to announce the winner of this roundup. After careful consideration, I've decided that the title of the best camping fan should go to the Image Portable LED Camping Lantern with Ceiling Fan.

It has everything a true camping enthusiast would appreciate; lightweight, affordable and multifunctional, it will cool you down during those hot summer days (and nights) spent in the tent.